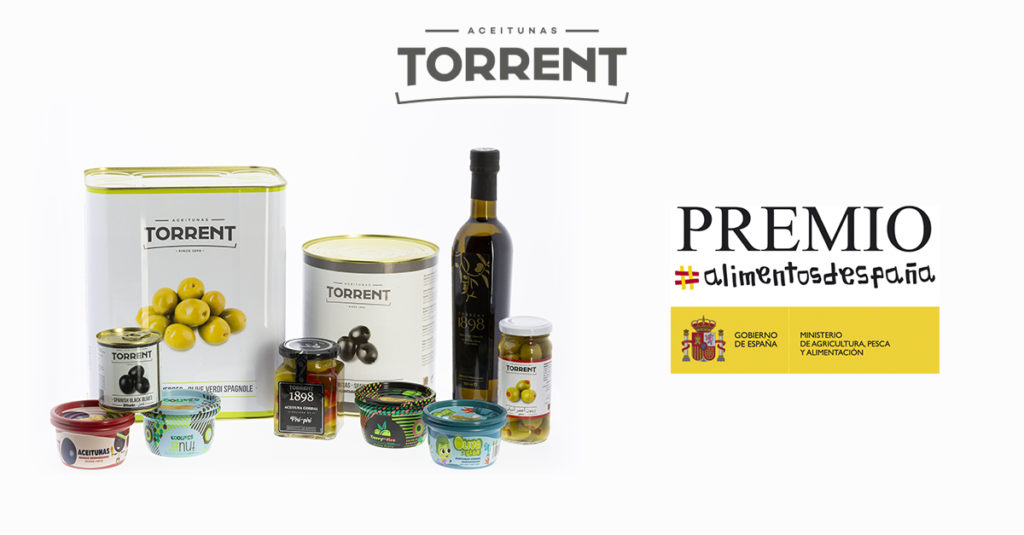 The award was given to Aceitunas Torrent by the Ministry of Agriculture, Fisheries and Food in recognition of its international record and its commitment to innovation in the Spanish food sector.

The company Aceitunas Torrent has been named one of the winners in the “2020 Spanish Food Awards” by the Ministry of Agriculture, Fisheries and Food.

These awards recognize outstanding work carried out by companies and professionals in producing, marketing and disseminating quality Spanish food, as well as their sustainable and efficient contributions to the growth of the Spanish food sector.

In this case, Aceitunas Torrent was awarded the Spanish Food Award for “Internationalization of Food” for “setting an example of internationalization”. The jury also pointed out that Aceitunas Torrent “has developed numerous presentations of the same product, showing its commitment to innovation and to adapting to consumer tastes“, highlighting “the development of the “Oliva Clan” line, which is specially aimed at the children’s market”, as well as “the successful integration of concepts such as sustainability and equality in the company”.

The deciding jury was made up of big names from the agri-food and fishing sectors as well as personalities from the world of haute cuisine, tourism or fashion. This was the 33rd edition, and the winners were chosen from among 200 nominations.

This is the third award that Aceitunas Torrent has received this year, which demonstrates its full commitment to innovation. The other two recognitions were a mention in the Cerdá Institute’s Innovation Report and winning the Product of the Year 2021 award with “Oliva Clan” in the children’s snack category.

On hearing the news, Blanca Torrent, CEO of Aceitunas Torrent, commented: “Receiving this award makes the family and all our team immensely proud, especially because the jury has taken into account not only this year but also the long-term record and history of our business. Internationalization and innovation are firmly in the DNA of Aceitunas Torrent and the fact that we have been able to put this across fills us all with great satisfaction”.

As well as the award obtained by Aceitunas Torrent and the Special Prize, which was won in this edition by Correos Market, other awards were given in the categories of the food industry, second prize for the entrepreneurial initiative, organic production, fishing and aquaculture production, catering and communication.